Dear Dr. Architecture:I stumbled across your blog while trying to find an architectural kit or game or software that I could give as a gift to my 10-year-old son. He has been interested in building things since he had the the ability to do so, and he is constantly "inventing" inventions/contraptions in his head and on paper. There is never a moment where he is not thinking. He even draws house plans in notebooks (rudimentary, but still plans). He has shown an interest in architecture for a few years now.I saw your post about books that you suggested for 12-year-old interested in architecture as a career. I also read the advice you included along with the list of books. I am wondering if you could add to that and tell me if a "course" exists that could teach a 10-year-old the basics of architectural drafting and drawing. I know of Sketch-Up, but I am thinking more of something that is kind of a step-by-step thing where I could buy an architectural drafting kit of tools and have him learn to hand-draw things like blueprints and architectural sketches. He likes to draw and doodles frequently. He enjoys art of all kinds. If you have the time to e-mail me regarding physical architectural drafting tools (non-computer, as we'll try Sketch-Up for on-computer drafting) and course books that a child could understand and use, as well as additional online tutorials or software that teaches these things, I would greatly appreciate your assistance.His birthday is fast approaching, so I am running out of time to find something architecture-related, but my own searching has not yielded anything with good reviews.Thanks in advance!
___________

As the birthday is fast approaching, I will hope this provides you enough time to secure a great gift.

Some best shops for architecture-related gifts are the following:

A CAF new website to teach teens about design is the following:
Discover Design - http://www.architecture.org/discoverdesign

Also, below is a brief paragraph from my book - Becoming an Architect, 2nd ed.  Truly, I would suggest building blocks to encourage imagination and creativity.  Everyone uses legos, but simply blocks -- a good sketchbook is also great to encourage drawing.


Toys
Over the past century, numerous toys with an architectural theme have been developed.  Many are variations of blocks; all provide children a sense of design, discovery, and creation.  For example, Legos® are one of the more popular children’s toys that architecture students say helped them become interested in the field.  John Lloyd Wright, the son of the famous architect Frank Lloyd Wright, invented Lincoln Logs in 1916. Introduced just prior in 1914, Tinkertoys® and Erector Sets allow children to construct and build their ideas.  A more basic toy that almost all children play with is blocks.  Sets of purchased wooden blocks can be used to build everything from patterns to elaborate structures, houses, and skyscrapers. 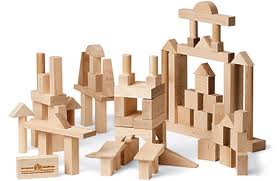 A less well-known toy, used by Frank Lloyd Wright as a child, is Froebel Blocks, a series of wooden stacking blocks developed in the 1830s by Friedrich Froebel, a German educator and the originator of the kindergarten, for children to learn the elements of geometric form, mathematics, and creative design. Wright described their influence on his work: “The smooth shapely maple blocks with which to build, the sense of which never afterwards leaves the fingers: so form became feeling,” and “A significant idea behind the blocks is the importance for developing minds of examining things around them in a freely structured manner.”

Another set of wooden building blocks to consider is Kapla.  Made of pine from renewable French forests, Kapla are small rectangular planks all measuring 1” x 4 ½ “ x ¼ “ .  Children of all ages can create just about anything without any glue, screws or other fastener.

As for tools, you might consider a drafting board and t-square, triangles, lead holders, etc., but I truly think a sketchbook would be best.  Drafting is NOT what architects do.

There are many summer programs offered by schools (mostly for high school students) that would be appropriate; check out -- http://www.archcareers.org -- for a list of them.

Dr. Architecture
With over 25 years of experience in the fields of architecture and career development, LEE W. WALDREP, Ph.D., has served in positions in four (4) accredited programs. As well, he served as Associate Executive Director of the National Archi¬tectural Accrediting Board (NAAB) and National Vice-President of the American Institute of Architecture Students (AIAS). Waldrep has written and presented on the topics of careers and architecture extensively around the country. In addition to his own book, Becoming an Architect, he is a contributor to AIA’s Architect’s Handbook of Professional Practice, 15th Edition.